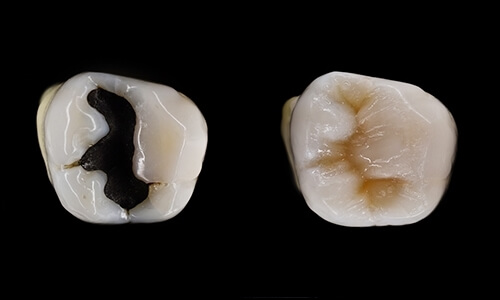 Here at Nordic Dental Centre, we have never performed any amalgam filling.

Amalgam is an alloy of two metals, in most cases, silver and mercury. (The reason that we previously used the amalgam was that it was cheap and easy to work.) Amalgam usually has longer durability than other filling materials but once the time is coming to its end for the filling, it can cause problem for the tooth. The filling or the tooth can have almost invisible to the eye cracks. In these cracks, food and bacterias penetrate and cause tooth decay under and around the filling. The cracks can also cause an internal tension in the filling which eventually can provoke a fracture of your own tooth.

Many people replace their old fillings due to concern caused by the debate about the harmfulness regarding amalgam and mercury while others want white fillings for aesthetic reasons. For whatever reason you would like want to replace your amalgam fillings, we follow a strict protocol for the removal. We have a double extraction system, one of which absorbs the amalgam and the other, the air around drill. We only use new drills and drill with a special method.
No amalgam or other material will be released in the nature as the clinic is equipped with a metal separator that clean and removes harmful substances from others.
We also offer the possibility of using Rubber dam, a latex sheet that fits around the tooth to prevent so no particles of the filling to be removed ends up in your mouth or stomach.

How to prepare yourself

There are several ways to prepare yourself before your amalgam removal.
Make an appointment with us for a consultation and we will inform you about different procedures.

Your safety comes before everything else!!!